The work of Jaime Serra

We could not have asked for a better way to premier our Portfolio of the Week section in this new era of Visualoop (read the announcement here, in case you don`t know what we`re referring to) than featuring no other than Jaime Serra.

Currently the Assistant Chief-Editor of the Barcelona-based newspaper La Vanguardia, Serra is one of the most important names in the contemporary infographic scene. Elected by his peers as the most influential infographic designer in the last 20 years, at Malofiej20, his contribution to the field of visual journalism has been praised all over the world – the recognition of a work that brought him to the same level of important figures like John Grimwade, Nigel Holmes and Fernando Baptista. Plus, one of Serra’s works, ‘La ballena Franca’ [The Right Whale], published in 1995 when he worked for the Argentinean newspaper Clarín, has been voted as ‘the most influential infographic of the past twenty years’.

The Right Whale, the most influential infographic of the past twenty years’ according to the voters in a public survey conducted by the SND-E via this website on the occasion of the 20th anniversary.

During his career, he has assisted newspapers and magazines such as The Independent, National Geographic Magazine, Corriere Della Sera, Il Sole 24 Ore, Gazzeta dello Sport, La Stampa, Editora Abril, Folha de Sao Paulo, El Periódico de Catalunya, Grupo Vocento, Tele 5, El Mundo Deportivo, Clarín, La Nación, La Voz del Interior, Olé, El Comercio, La República, Diario de Noticias, Jornal de Noticias – just to quote a few. He has also participated as a juror for international journalism design awards of the Society for News Design (Syracuse, USA) and the Malofiej Awards (Pamplona, ​​Spain). His work in journalism has been honored by more than one hundred awards and recognitions from the SND, SPD, Malofiej and Laus organizations and has been exhibited in the Hall of Arms of the Citadel (Pamplona, ​​Spain) and in the gallery of the National Geographic Society (Washington D.C., USA).

We had the opportunity to interview Serra, roughly two years ago – a long, in-depth conversation very much worth reading, in case you haven’t seen it yet -, and now we asked him to also be a part of our growing showcase of infographic designers worldwide.

Jaime started by sharing with us some of the more artistic works he has been exploring for the past couple of years.

Data in the Pockets

Objects found in the pockets of Serra’s child during the first half of 2005 (when he was seven years old), and distributed according to four concepts: game, sweet, nature and magic (from inside to outside). This work has been adapted for different mediums.

Sex life of a stable couple

This image depicts the sexual life that three couples have held for a period of 365 days. There’s also a dedicated website, vidasexualdeunaparejaestable.com, where visitors can add their own data. The visualization is updated in real-time.

This project describes the author’s cigarette addiction during a trip to the US. The trip runs from Hibbing, near the Canadian border, to New Orleans. Each red circle corresponds to the consumption of a cigarette, originally marked on the map used on the trip – by a burn with the actual consumed cigarette. Locations were pinpointed with a GPS, so it’s quite precise. 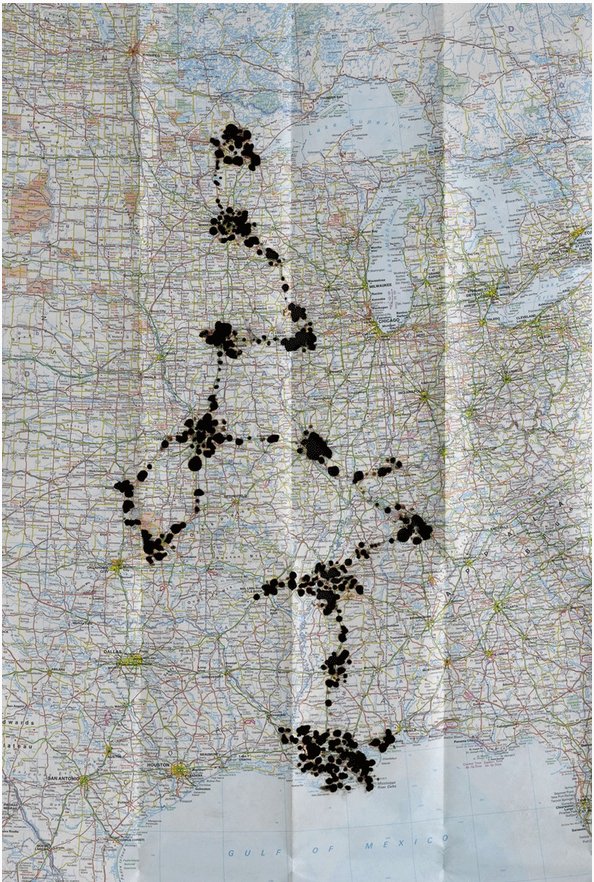 During 52 days, the SMS messages sent by a woman to a man she was involved with were photographically recorded. They were both traveling separately in Europe and this was their primary mode of contact. A total of 464 reproductions of phone screens make this work halfway between the literary and the visual. 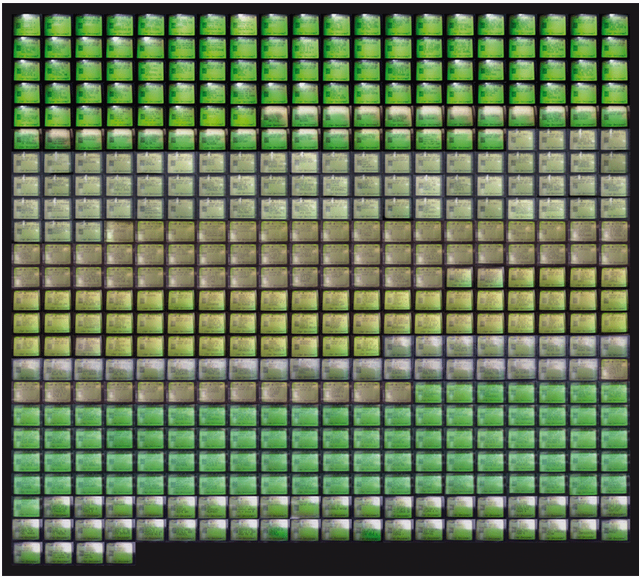 His latest projects, published in December 2014 and earlier this month, can be seen as a trilogy, three stories that Jaime introduces with the following text:

“Data are raw material, without any use in that stage. It must be processed and transcribed with a visual language to be understood, and the tool that does that is infographic design. A communication tool usually associated with the transmission of scientific knowledge, but like any other human communication tool it can narrate truths and deeds, reality and fiction.

“The collective data, gathered with current technologies that are able to do it without the interference of individuals, are concrete, unquestionable, equal for all. Precisely for this, are unreliable. It can’t reveal nothing from the individual standpoint, because it can’t be true. Truth involves a component of emotion, interpretation, subjectivity, which means each individual can have their own truth. Truth is the reality of a specific individual. It’s only when you apply data to what a specific person is doing, at a specific time, about a specific subject or topic, that another person can find it useful, revealing. Because, despite we love to think that we are unique, it is in intimacy that we, human beings, by analogy or opposition, really find ourselves.”

“For a whole year I established a simple ritual with my youngest child. Every afternoon, after school, I offered both fists. He choose one and opened his mouth and closing his eyes, while I gave him the candy in the mouth.
The ritual was held even when I could not go to school, through a third person.”

He got it right every time, because, although he did not know, both hands containing identical candies in color, shape and flavor, repeated by day of the week. For the weekends I used other candies, whose color was different for each hand: white for left and black for the right.”

“I never told him that one of the hands was empty, or the contrary. From the first day, I simply offered both fists in silence, and him, after getting it right he always simply lost interest in the other fist.
After a few weeks lemon, not being the favorite, was the most desired: its flavor meant weekend was up in the next few days.”

“On my 50th birthday, I invited 50 friends for a celebration. They all received three small paper packets filled with confetti, each of a different color and meaning. At 2.30 h, the time at which, according to the Spanish Civil registry, I came into the world, guests could throw one of the packages confetti, chosen according to the wish they had for me. Twenty-nine (58%) people chose blue, seventeen (34%) red and three (6%) green. One of those present felt unable to decide, and didn’t throw any, other, for the same reason, decided to launch a handful (1%) of blue and one (1%) of red.”

“The relationship I have with coffee is twofold: on one hand I get to consume it compulsively, almost like an addiction, on the other hand the reaction of my body to the excess of lactose – I don’t like to have coffee pure – forces me to reduce or completely abandon it for days.”

“During 2013 I quantified how many coffee cups I had, from taking the stains left on sheets of paper. The number of cups is discriminated into two types: small coffe with milk and coffee latte, using a cup model of different diameter for each case. In order to give greater accuracy to the “datification” I used the same cups all year.”

“For the visualization I used a sheet of 25 cm x 50 cm for each month. Since I had to be able to transport these sheets with me, they had to be foldable into thirty-two squares of 6 cm each, slightly larger than the diameter of the cup of latte. Each square corresponds to a day, reserving the last square for the month name and other annotations.”

For this special edition of Portfolio of the Week, Jaime also sent us several works developed by his team at La Vanguardia. The topics of these works are proposed by the graphics department to the different sections of the daily newspaper. “We do all the research, create all the images, produce all the text and do our own fact-checking”, explains Serra. And although many of the works presented here are signed by one person, it’s important to note they had the intervention of others in the team: “Team work, the ‘futbol total’ style we have in our department, it’s essential for its success”.

Time to close this very unique edition of Portfolio of the Week. Don’t forget to visit Jaime’s blog (in Spanish) and follow him on Twitter (@ja_serra) and Flickr.